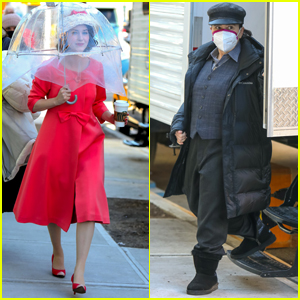 Rachel Brosnahan is hard at work on the new season of The Marvelous Mrs. Maisel!

The 30 -year-old actress was discerned with Starbucks in hand while arriving on deep-seated of her award-winning Amazon series on Tuesday afternoon( March 2) in New York City.

Rachel got into character as Midge Maisel in a luminous pink clothing paired with a lily-white, cord hat as she bided under an umbrella, that restrained her safe amid the pandemic.

Also distinguished on position, was Rachel's co-star Alex Borstein, who dallies Susie Myerson on the show, who sported a face mask as she made her way out of her trailer and onto set for filming.

Later in the working day, Rachel put on face mask and waved to photographers as she leader residence after a daylight of filming.

Production for The Marvelous Mrs. Maisel had to be pushed back because of the ongoing pandemic.

Back in January, Rachel took to Instagram to differentiate her first day back on set.

” It examines a bit different this year…but we’re back! Working apart on @maiseltv Season 4.” Rachel wrote along with a pic of herself all dolled up as Midge.

During a recent interview, Rachel Brosnahan discovered the item she stole from place of the picture!

A berth said that he shared Rachel Brosnahan (@ rachelbrosnahan )

In early March we began reporting daily on how brands were dealing with Covid-1 9. But it’s become clear that the current climate is one of near-perpetual disruption, so we decided to keep on telling the stories of inspiring brand leadership and programme amid the most recent disasters in an agitated nature. Our goal is […]

An Agent of Change

The Covid-1 9 pandemic has changed how people and enterprises waste and operate. Over the coming pages we’ll explore ways in which our current world is already very different from the one we knew merely a few months ago, as well as predictions of our” brand-new normal” formerly the proverbial barge stops rocking. Specifically, we’ll […]

Press Release from the Journal of Marketing: Do Promotions Make Consumers More Generous?